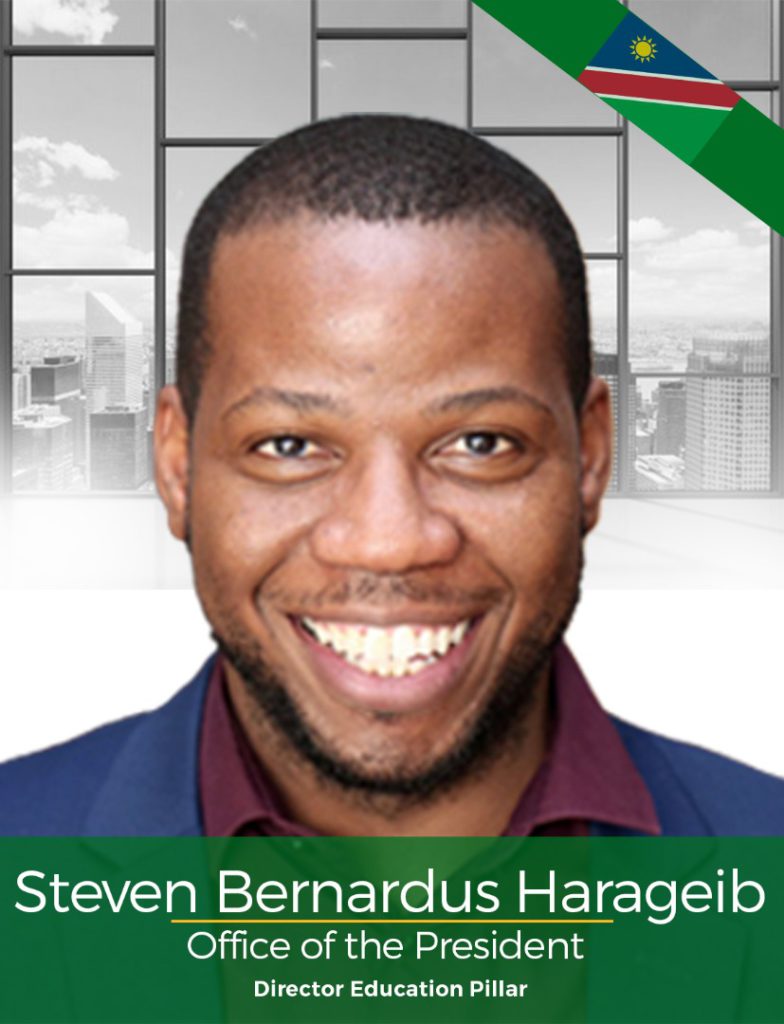 “Agriculture, by creating employment opportunities in the agribusiness sector, has the potential to make a significant contribution to our livelihoods.”

Steven Bernardus Harageib is strong advocate for the mainstreaming of youth, mental health, and gender-based violence issues into the development agenda. He is an award winning international speaker. His public service to influence transformational change through his work at the Office of the First Lady of the Republic of Namibia and One Economy Foundation is informed by his more than 10 years’ experience in the non-profit sector and educational background in social work. As the Technical Director and Head of Programmes, he manages the #BeFree movement an international youth movement that stimulates non-judgmental conversations impacting over 100 000 young people across the globe. He also places strong emphasis on mental health of survivors of violence, frontline service providers and perpetrators of violence and recently helped launch the Problematic Mindsets research report on the work we do with inmates. He is a co-founding member of Young Achievers Empowerment Project which was started in 2004. He has served on the Namibia Youth Coalition for Climate Change as the Strategic Partnership Officer. He have participated and represented Namibia on several international platforms. He is a 2019 Thomson Reuters Foundation Change Maker, Apolitical Public Service Fellows, Mandela Washington Fellow and a One Young World Ambassador. He served as the Deputy Regional Representative for African at Child Helpline International serving 13 helplines. On the continent he has served as the Southern African Commonwealth Youth Representative, participated in the Decade of Human and Peoples Rights Symposium in Tanzania as well as the High-Level Dialogue on Transitional Justice. As a mental health activist, he believes wellness should be highlighted and integrated into the continental- development agenda. He is a serial optimist with a strong curiosity for life and understanding. He is seeks to create spaces for amplifying emerging and new voices to enrich the conversations and dialogues about development. He believes that civil society are co governors holding government accountable whilst expediting the national and continental agenda.